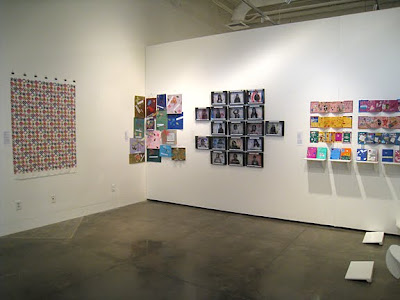 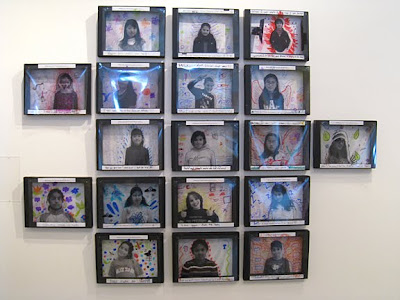 I visiting the Euphrat Museum at De Anza College today to drop off some items for an installation and to photograph images of my students' work to share with them. Today was the last day of workshop series I was conducting at Nimtiz Elementary in Sunnyvale, CA. The workshop series focused on exploring leadership skills through art. The goal was also to encouraging students to develop their personal visual and verbal vocabularies. I greatly enjoyed the children and hope to see them again next year in workshops.
Posted by Corinne Okada at 10:45 PM 1 comment: Links to this post 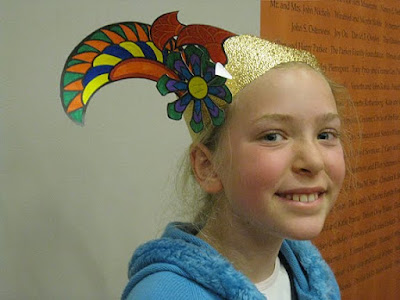 On Friday night I conducted an Egyptian Art Deco headdress activity at the de Young Museum for their closing Friday Night event for the King Tut exhibit. It was a blast. I had my children as my assistants. Here is a link to the PDF files if you want to print these out and try them out at home or in a class. These templates at a new textile blog site for my textile research. I haven't figured out how to embed Scribd files in Blogger and for the other blog I am using Weebly; it is easy to insert the files so you will find I have posted them there instead of here.

Anyway here are some images from the evening. It was so fun!! I will be adding more images soon. 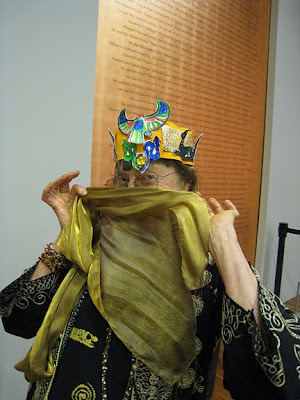 Above: This woman was fabulous!
Below: My children were great models and assistants: 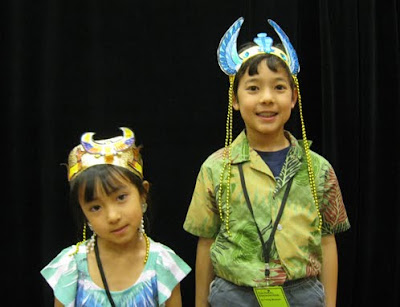 Below: This guy spent a long time perfecting his headdress. He and his friends were so dedicated to their creations that they sprawled out on the floor when there was no more room at the tables. I had printed 100 of each of the four designs and only had a small stack of maybe 30 afterward. I had also cut around 200 bands and we ran out around 7:40 (event ran close to 9:00 pm). We were able to get some white card stock paper and we cut those for the headband strips. (Thanks, intern, Alex!) 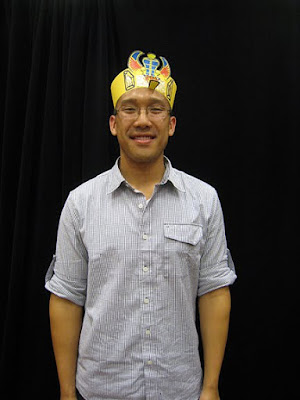 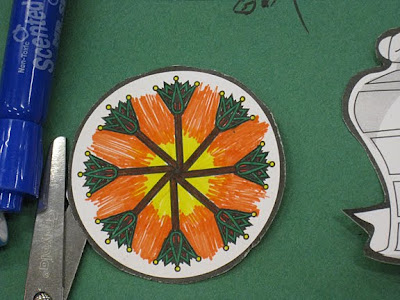 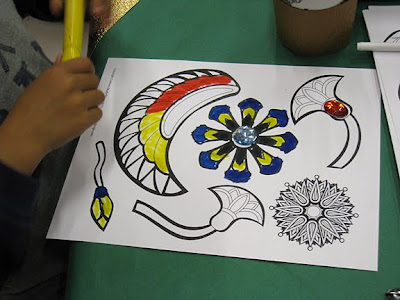 Below: This young artist was very creative.
She started to hole punch the gold paper and add the gold punched pieces as decorative elements to her design. Many visitors started to do this, too, after I shared with them what this artist had done. 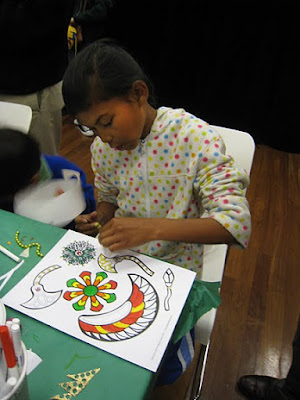 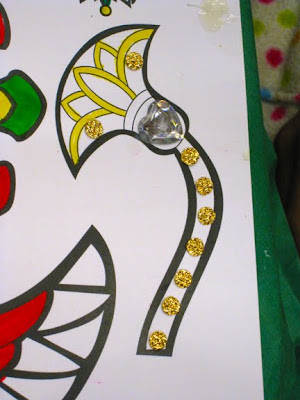 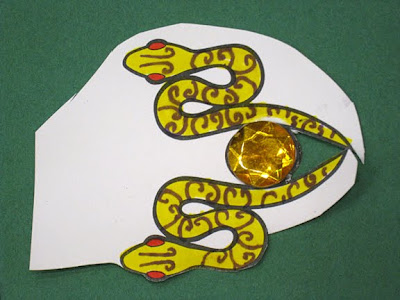 Posted by Corinne Okada at 1:51 PM No comments: Links to this post

I have been doing online research in to digital laser cutting of fabrics. Ponoko can cut felt as well as other materials. And this blog, FABerzLOG has some images of really interesting textile work with laser cutting. Designer Elena Manferdini is a multifaceted designer featured in this blog.
Posted by Corinne Okada at 5:17 PM No comments: Links to this post

I am deep into planning out web documentation of two projects that I am embarking on and in the process I am leaning about various online tools to leverage.

Cultural Tech-Fusion Fabrics will explore the ripples and echoes of immigrant cultures in Santa Clara through the canvas of ethnic textiles. The result of the research will be digital textile designs reinterpreting the blended visual vocabulary of Santa Clara County.

ONLINE TOOLS FOR DOCUMENTATION AND PUBLIC OUTREACH:
I am sure I will be posting more online tools and sites as I move along in my projects. As both of the above projects have a public component, it is important that I research and absorb as much as I can now in the formative stages.
Posted by Corinne Okada at 5:22 PM No comments: Links to this post 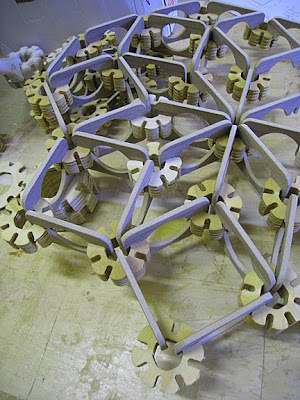 I visited Rob Bell's Zomadic Studio again last week. It is always so inspiring to see what he is working on. When I arrived his computer die cutter was working on cutting out segments for an architectural game. 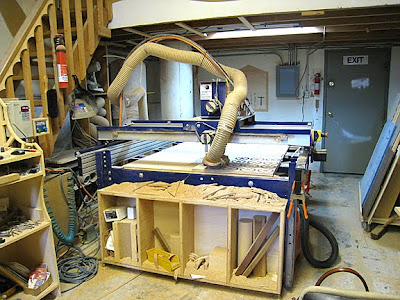 I felt like I was watching a dance performance as I observed the mechanical arm moved about cutting the wooden lace-like discs. 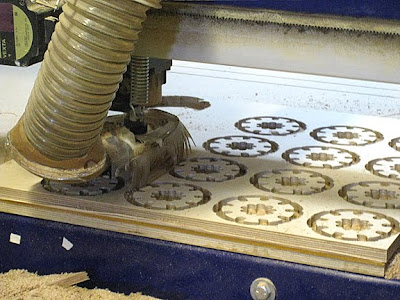 I was visiting Rob to commission him to create a portable animation stage for the stop motion claymation classes I will be teaching at Cureton Elementary in Alum Rock, San Jose and in Cupertino in the spring and possibly in the Tenderloin of S.F. at some point. I recently completed teaching animation classes (using iMovies) at Montalvo Arts Center and am preparing to teach similar animation classes across the South Bay. The stage I have made are quite worn (made of cardboard) and it would be great to have a sturdy foldable one that I can transport easily. Here are a few sketch ideas Rob created on the fly while we were brainstorming in his studio: 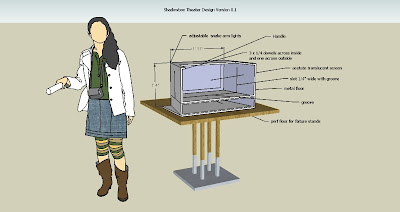 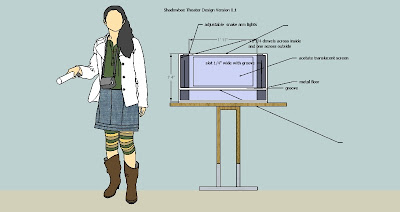 After we discussed my project I got to look around his studio a bit. I really enjoyed the detail on this piece below. He told me I could provide an Illustrator file and he could translate that into something his machine could reference to create such intricate etch cutting. I've been dreaming about such detailing on my stage ever since! 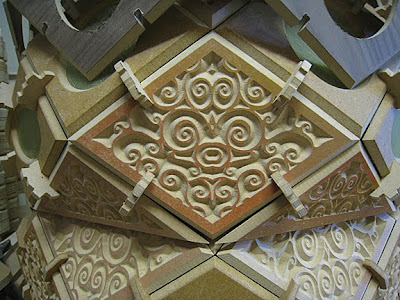 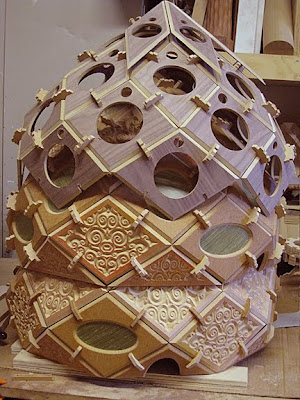 Below is an image of a few of his building toy "blocks". We discussed getting together to think of ways to create elementary/junior high projects that would integrate these components into core curriculum projects. More on this later. 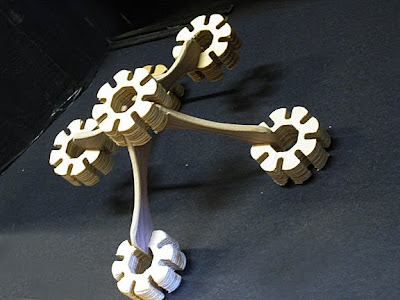 I also met an artist, Chris Palmer at Rob's studio. He gave me the coolest fold up business card, which should not have surprised me as he is an origami artist. I loved the title on his card "Designer Geometer Ornamentalist Folder" His website is www.shadowfolds.com. His work takes my breath away. It really relates to the textile exploration I will be doing as he folds in fabric as well as paper. I'll be exploring his Flickr site more soon!
Posted by Corinne Okada at 11:32 PM No comments: Links to this post