It is an exciting time to be entering the 3D design space in K-12 education as there are so many opportunities now for youth. I began teaching Tinkercad and 3D printing in November of 2013 (when I purchased my Afinia 3D printer off of Craigslist) and I have enlisted both my children to assist me in teaching the workshops I have taught in museum and library spaces. When I learned of the Stratasys Extreme Redesign Challenge, I asked my kids if they wanted to apply and I shared this design challenge with their teachers.

It was wonderful and exciting news to find out that both Cole and Emily ended up in the top 10 in the Art & Architecture category of the design challenge for 2014. There were over 600 entrants from 12 nations. This is the 10th year of the Stratasys Extreme Redesign Challenge.


The design challenge required a written component. Below are the statements for Cole and Emily's designs.

“Ireland has a very interesting history beginning in the Neolithic Ages, and last summer I got to see it first-hand.  In Ireland there were a lot of amazing sites and things to see, but by far the most interesting was what archaeologists have uncovered about Ireland's past. Archaeologist have found many Neolithic works, ranging from flint arrowheads to the giant Neolithic tombs like Newgrange.  Archeologists have made some amazing discoveries in Ireland, not in the least the Knowth Mace Head. The Knowth Mace Head is a piece of flint carven into a small face. Nobody knows what it was for although archaeologists believe it was used for religious practices. Amazingly, archaeologist think that these early Neolithic people actually use a primitive drill to make intricate swirls on the surface.

Inspired by the brilliance of these early people, I decided to make my own version of this early artwork using modern day technology like 3D designing. Using a free cloud website called Tinkercad and Adobe Illustrator, I was able to create my best impression of this early art piece using modern day technology. It was so cool to interpret with modern 21st Century tools something originally designed with early Neolithic technology. This piece to me symbolizes technology throughout the epochs of history.”

Emily’s statement for a World of Peace:
“This object represents the story of a Japanese girl named Sadako and the thousand paper cranes she tried to make. Sadako got leukemia in World War II when a bomb fell near her house, and she got placed in the hospital. Sadako was intent on living so she started to make paper cranes. She wanted to make 1,000 paper cranes because she believed in the old Japanese legend that the gods would heal anyone who made 1,000 paper cranes.

She only made 644 paper cranes before she died, but I think Sadako showed great strength and inspired others. In her own personal struggle she symbolized the need of worldwide peace. I think she symbolizes that peace on earth is better than war and fighting. She was spreading her own message of peace, too. Sadako is a true figure of peace.

My paper cranes are in a sphere because the sphere represents the Earth and Sadako spreading the message of peace around the world. I believe that 3D printing is an example of very new technology that could be used to help injured or special people. This new technology could also be used for bad things. The memory and message of Sadako can help us focus on using 3D printing for good uses.”

Posted by Corinne Okada at 5:08 PM No comments: 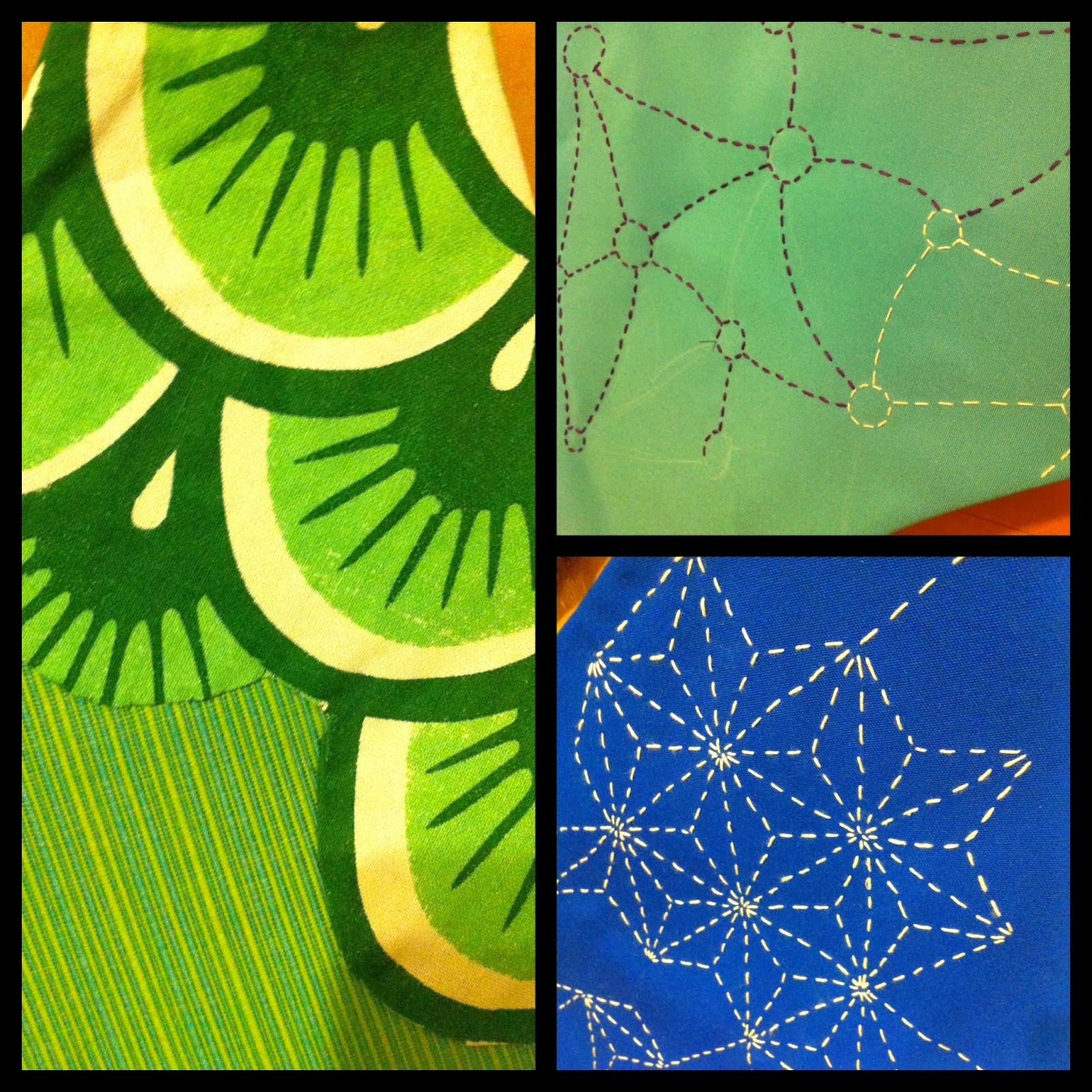 This weekend I am adding decorative hand stitching to a tapestry commissioned by a neurological research center. The cardboard is just for temporary support. More elements and layering of fabrics will be added but this is what is developed so far for this Synapse Tapestry for the Albert Sherman Center. 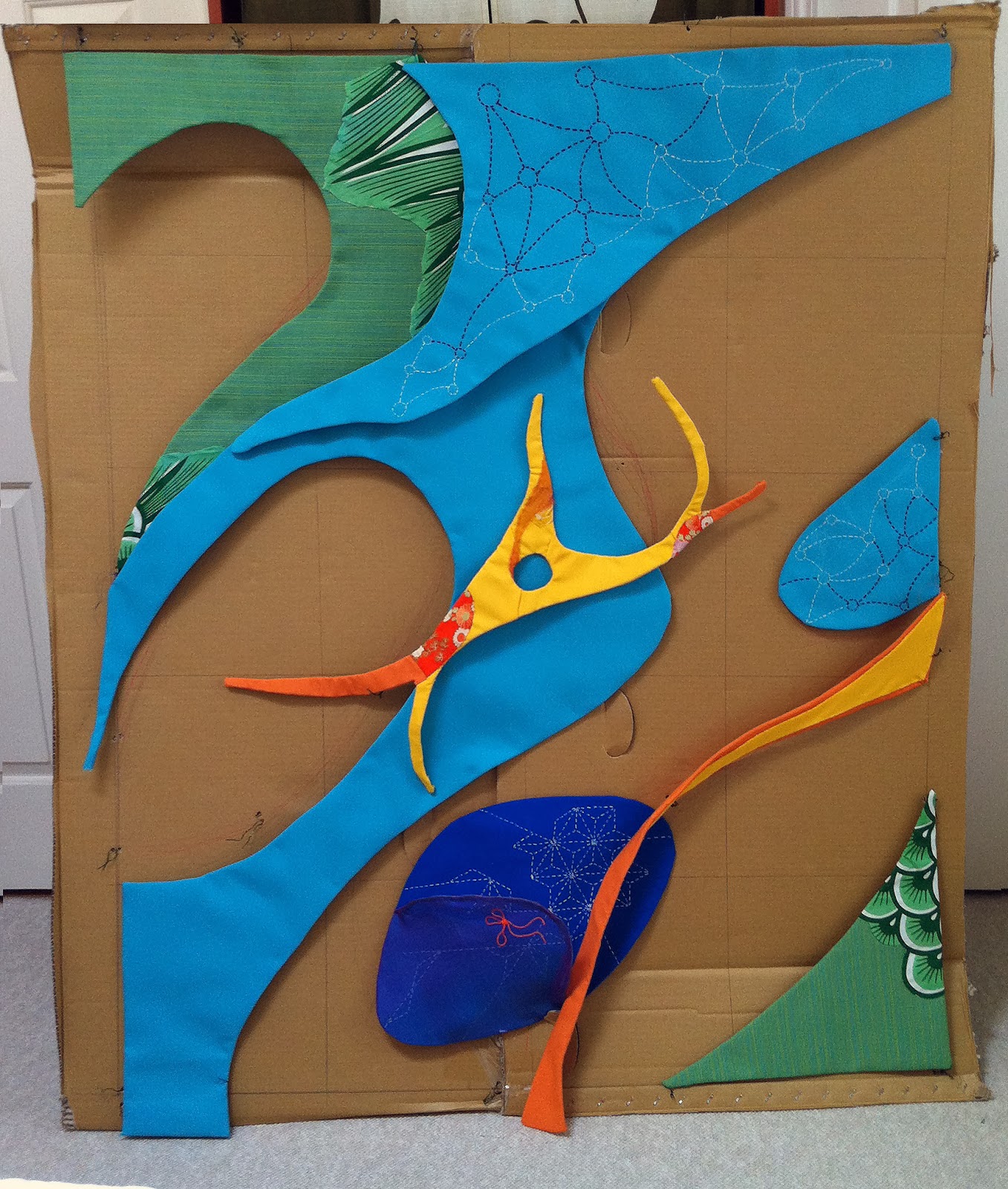 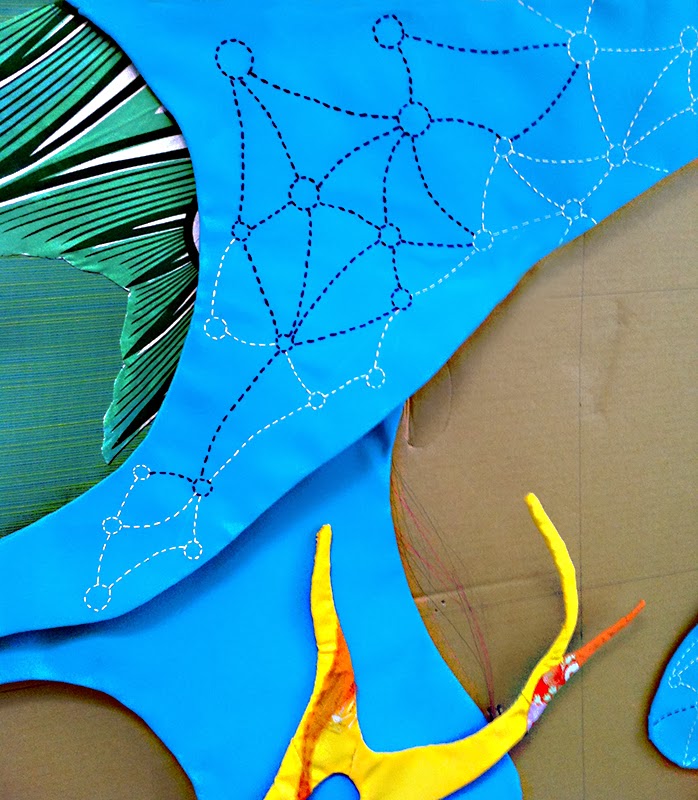 Posted by Corinne Okada at 12:14 PM No comments:


Since the fall 2013, I have conducted community workshops, researched neighborhood histories, and have created a collection of visual imagery reflecting on communities along the Santa Clara Street/Alum Rock/Capitol Expressway bus route. The imagery, histories and stories collected will inform the pattern designs and art enhancements created by Merge Conceptual Design for the bus stop shelter along the Alum Rock Rapid Bus Line. Here is a link to a community meeting for the project. The project includes 21 shelters at 11 station locations along a 7.4 mile corridor. Ground breaking of the line will occur soon.

Below is a very rough concept sketch I drew for one of the pattern ideas. It reflects on the Jackson Street/Alum Rock area and would focus on the African American community and its important history in the area. At one time this area had large congregations in the Baptist Churches and they did (and still do) a lot of community outreach and support. This pattern focus on the beautiful church hats I saw at Saint Paul Baptist Church on their members photo wall. 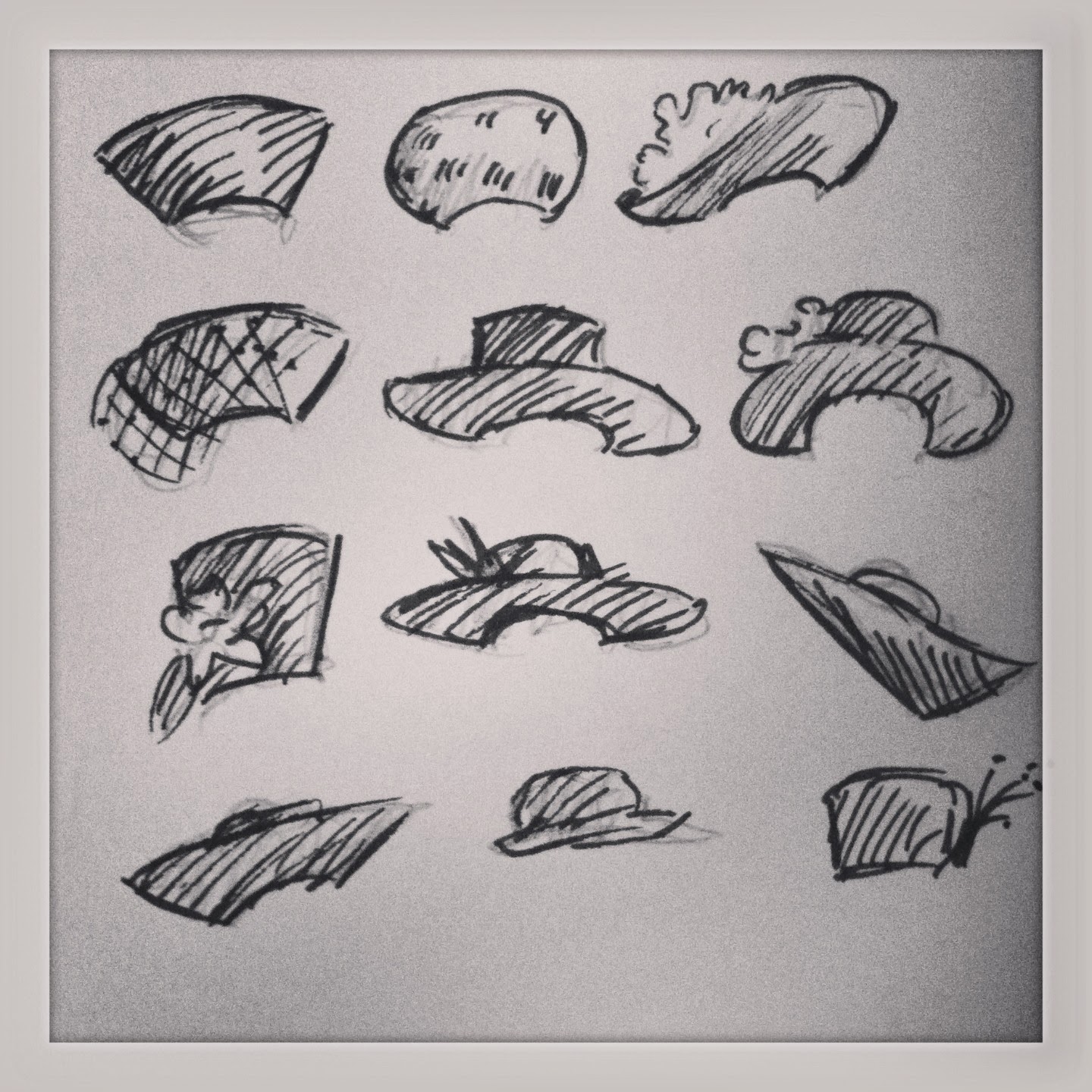 There was a long wall of photos documenting many years of membership (height of membership was in the 60’s) and most women are wearing unique and dramatic hats in these images.  A pattern that is a collection of of their church hats from over the years would be a unique and site specific pattern.

After reflecting on this idea I did a bit of an online search and found this wonderful audio piece giving context to African American church hats: http://www.npr.org/templates/story/story.php?storyId=876404 I enjoyed listening to time mark 2:50; it is a vivid description of a child envisioning black women’s church hats as having minds of their own.

The photo book Crowns shares the history and beauty of these church hats.

Posted by Corinne Okada at 10:19 AM No comments: